Concerns about dependency on foreign oil and environmental damage have led to the development and use of alternative fuels in Minnesota. These include biofuels like ethanol and biodiesel, compressed natural gas, and electricity. Each alternative fuel that has been used in Minnesota comes with advantages and disadvantages. It is also important to remember that subsidies matter when it comes to alternative fuels — any new fuel faces an entrenched gasoline/diesel distribution and delivery system that is familiar and works with virtually every automobile on the road meaning that subsidies are often necessary to even make an alternative fuel available to consumers.

The use of drop-in biofuels (meaning that they can be used in existing vehicles without modifications and can utilize existing distribution systems)1 has increased rapidly since their initial adoption in the 1990s. A law passed in Minnesota requires that all gasoline is either 20% ethanol or has the maximum allotment of ethanol allowed by the EPA.2 As a result of this law, nearly 20% of Minnesota’s corn crop is devoted to ethanol production each year, making Minnesota the leading user of biofuels in the United States. Nationally, biofuel consumption is likely to plateau near current levels, as is shown in Figure 1. As technology continues to develop it is likely that incentives for fuels from non-food sources may emerge to shift the focus away from corn- and soy-based biofuels.

Figure 1: Use of biofuels in the United States 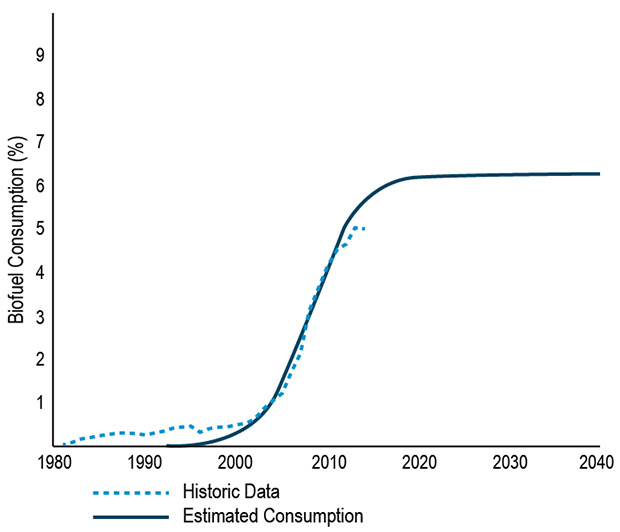 Compressed natural gas (CNG) has emerged primarily as an alternative fuel for heavy-duty vehicles. The use of CNG results in fewer carbon dioxide emissions, fewer particulate matter emissions, and is 20 to 40 percent cheaper in comparison to diesel fuel. Despite these advantages CNG has a lower energy density than diesel fuel and emits significant amounts of methane when burned. By 2040 it is projected that CNG will make up approximately 7 percent of total energy use for the heavy-duty vehicle sector.

Other alternative fuels are likely to emerge in the future as people search for ways to improve efficiency and reduce the environmental impacts of transportation systems. One emerging alternative fuel that is used extensively in Sweden is dimethyl ether (DME). DME is a propane-like alternative to diesel fuel, primarily intended for use in heavy-duty vehicles.4 DME is potentially renewable and can be sourced from feedstocks, biogas and natural gas. Additional research is likely to lead to additional alternative fuel solutions, including improvements in existing alternative fuels.