Bring up the relationship between transportation and the environment and many people’s minds focus in on images of diesel exhaust billowing from large vehicles. Trucks and other large vehicles certainly contribute to air emissions in Minnesota, but contributions from vehicles extend far beyond diesel exhaust. Transportation has a significant effect on air quality in Minnesota, and as a group, on-road vehicles are now the biggest overall contributor to air pollution in Minnesota. On-road motor vehicles make up approximately 24% of overall emissions in the state, while off-road vehicles and equipment (including machinery used for road construction) contribute another 21% of total emissions.1

Despite making up a larger percentage of total emissions, the total amount of emissions from highway vehicles have decreased significantly over the last 20 years. Since 1990, overall tons of pollutants emitted from highway vehicles has fallen by nearly 50%.2 The downward trend in overall air emissions since 1990 is encouraging, though further work must be done to ensure that gains continue. Permitted sources like power plants have reduced their emissions significantly during the last 20 years. Controls put into place under the Clean Air Act have resulted in a nearly 70% reduction in emissions from Minnesota’s power plants, and smaller reductions from other permitted sources.3 This has helped to reduce the number of air quality alert days that have occurred in Minnesota over the last 10 years. To continue making improvements, it is important to address non-permitted sources like on and off-road vehicles in addition to residential and commercial sources of pollution. Figure 1 shows the number of unhealthy air days that have occurred both statewide and in individual communities. In 2016, there were seven unhealthy air quality days compared to a high of 41 in 2001. 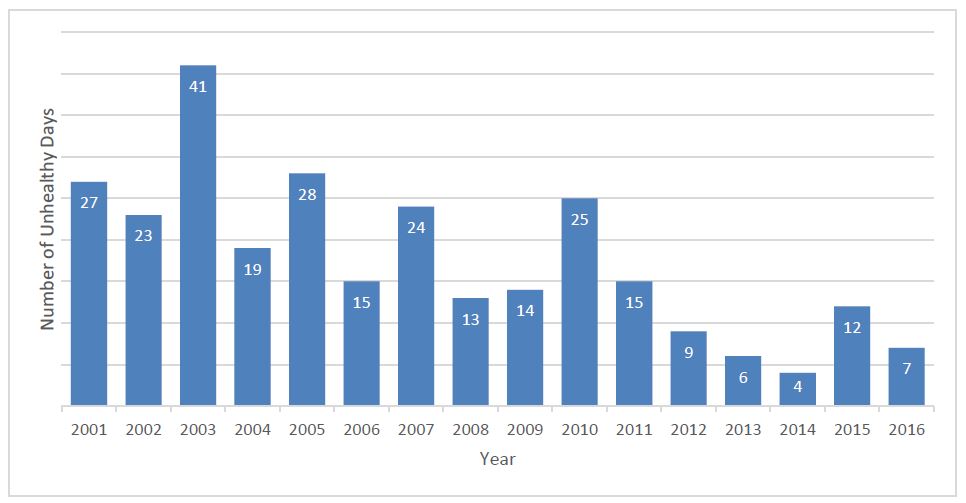 The impacts of air pollution extend far beyond the environment. Despite reductions in the volume of air pollutants emitted in the state over the last two decades, current air pollution levels are high enough to cause significant negative health impacts for Minnesotans. Breathing in polluted air can cause a wide range of problems that range in effect from irritating to potentially fatal. Some of the known health problems linked to air pollution include asthma, increased susceptibility to allergens, cancer, heart attacks, and bronchitis. A 2015 study found that while communities of color and lower income tend to own fewer vehicles, do less driving and use public transit more often than other groups, they are also exposed to higher levels of traffic-related pollution.4 Many communities of color and lower income bear a disproportionate burden of traffic-related health impacts while contributing less to vehicle pollution. In the transportation sector, behavior and street design changes can help improve air quality. Transit ridership is growing and congestion is improving through design and transportation demand management.