Bring up the relationship between transportation and the environment and many people’s minds focus in on images of diesel exhaust billowing from large vehicles. Trucks and other large vehicles certainly contribute to air emissions in Minnesota, but contributions from vehicles extend far beyond diesel exhaust. Transportation has a significant effect on air quality in Minnesota, and as a group, on-road vehicles are now the biggest overall contributor to air pollution in Minnesota. On-road motor vehicles make up approximately 28% of overall emissions in the state, while off-road vehicles and equipment (including machinery used for road construction) contribute another 19% of total emissions.1 Despite making up a larger percentage of total emissions, the total amount of emissions from highway vehicles have decreased significantly over the last 20 years. Since 1990, overall tons of pollutants emitted from highway vehicles has fallen by nearly 50%.2

The downward trend in overall air emissions since 1990 is encouraging, though further work must be done to ensure that gains continue. Permitted sources like power plants have reduced their emissions significantly during the last 20 years. Controls put into place under the Clean Air Act have resulted in a nearly 70% reduction in emissions from Minnesota’s power plants, and smaller reductions from other permitted sources.3 This has helped to reduce the number of air quality alert days that have occurred in Minnesota over the last 10 years. To continue making improvements, it is important to address non-permitted sources like on and off-road vehicles in addition to residential and commercial sources of pollution. Figure 1 shows the number of air alert days that have occurred both statewide and in individual communities. 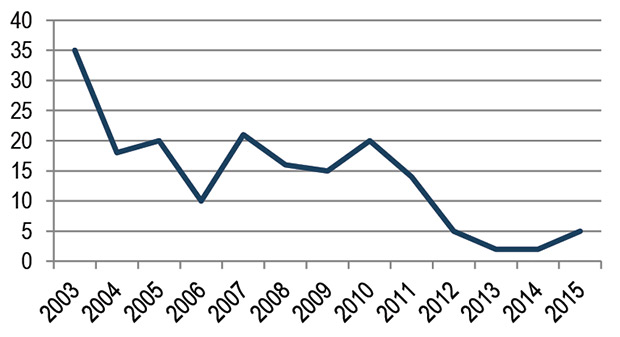 The impacts of air pollution extend far beyond the environment. Despite reductions in the volume of air pollutants emitted in the state over the last two decades, current air pollution levels are high enough to cause significant negative health impacts for Minnesotans. Breathing in polluted air can cause a wide range of problems that range in effect from irritating to potentially fatal. Some of the known health problems linked to air pollution include asthma, increased susceptibility to allergens, cancer, heart attacks, and bronchitis.4

Transportation infrastructure and land development both increase the amount of stress on Minnesota’s water resources. Replacing natural land cover with hard surfaces (Figure 2) increases run-off into water bodies and contributes to the movement of pollutants from land surfaces into bodies of water, including wetland areas. 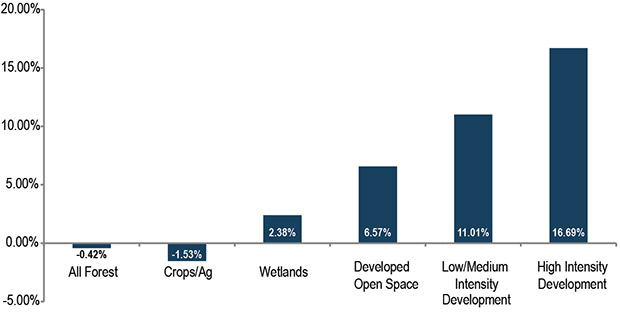 Chloride is a water pollutant used in road salts for de-icing, and enters surface waters, groundwater, and soil after snow melts. It takes only one teaspoon of road salt to contaminate five gallons of water.6 Plants have a difficult time taking up contaminated water, influencing the entire ecosystem.7 In addition to negatively impacting plants and wildlife, high chloride concentrations in surface and ground water pose hazards for human consumption.8 Once chloride has contaminated water, it can only be removed through complex and energy-intensive reverse osmosis procedures that cannot practically be carried out in ponds, streams, lakes, or rivers. Figure 3 shows the number of contaminated surface waters in Minnesota. Using salt-tolerant road-side turf mixes to absorb runoff, mixing road salt and sand on roads that are pre-treated with salt brine, and utilizing underbody plows all offer ways to reduce the amount of road salt needed for deicing purposes.

Figure 3: Number of water bodies impaired by chloride in Minnesota

Wetlands provide important ecological services, including wildlife habitat, groundwater recharge, water quality protection, and stormwater management. Over the course of the last century, Minnesota has lost approximately half of its original wetland acreage through draining and filling for agriculture and development.

Data that tracks total wetland acreage show that Minnesota has added wetlands in recent years. This is an achievement to be celebrated for sure, but concerns linger as most of the wetlands counted in this survey are ponds that have limited habitat or filtration value. Despite gains in the total acreage of wetlands, many of Minnesota’s wetlands are undergoing conversions from more natural types of wetlands to cultivated wetlands. This indicates a reduction in many of the ecological qualities that make wetlands valuable to ecosystems. The most common causes of wetland loss are agricultural and rural development.