There is broad consensus that climate change will alter the natural environment, economy, and quality of life in Minnesota over the next century and beyond, though specific impacts remain uncertain. Increased temperature variation, precipitation levels, and frequency of extreme weather events are expected to stress the transportation system’s design, construction, maintenance, and operations; generally increasing the lifecycle costs of infrastructure. To maintain security and enhance financial efficiency over the next 20 years, it is critical to consider climate vulnerability in transportation planning and investments.

While climate change is a global phenomenon, its effects have been particularly acute in Minnesota, where annual average temperatures have risen two degrees over the past century 25 percent more than the global average, and up to three degrees in the northern part of the state. Within the U.S., Minnesota’s winter temperatures have risen more than that of any other state over the past 40 years. The most dramatic temperature rises in Minnesota since 1895 have occurred in the months of January (2.5-4.5˚F degree rise), February (5-7˚F degree rise), and March (3-5˚F degree rise). Figure 1 shows the average annual temperature in Minnesota back to 1895. In addition to greater temperature rises, Minnesota has experienced more large storms. 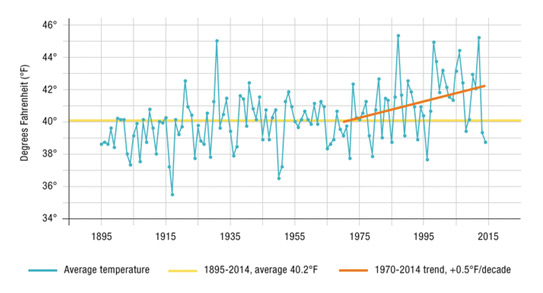 Minnesota’s ecosystems are particularly sensitive to a changing climate.2 Species at the edges of these ecosystems will be most vulnerable to climate change.

To counteract the impacts of a changing climate, Minnesota must work to adopt strategies that focus on adaptation and mitigation. While these two concepts are commonly thought of in the same light, they have distinct meanings. Adaptation focuses on building resilience and reducing the vulnerability of systems, while mitigation focuses on reducing greenhouse gas emissions to limit the severity of effects brought about by climate change.

Figure 2: Past and projected transportation emissions in MN 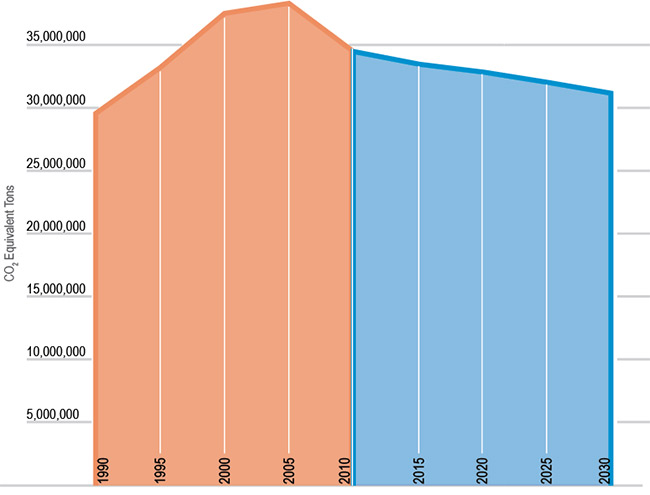 By taking actions to reduce vulnerability and build system resilience, adaptation can reduce the impacts of climate-related stresses (long-term trends that increase vulnerability) and shocks (extreme events). Adaptation considerations can be incorporated into asset management, long range transportation planning, design and construction, operations and maintenance, and emergency management. Adaptation is usually informed by vulnerability assessments, though the two are distinct processes.3

Understanding the ways that a system is vulnerable to the impacts of climate change informs what adaptive strategies will be most beneficial.

MnDOT completed a Flash Flood Vulnerability and Adaptation Assessment pilot project in early 2015, focused on Districts 1 and 6 in the Northeastern and Southeastern parts of the state, respectively. The project assessed the vulnerability of bridges, culverts, pipes, and roads along streams to flash flood events — one of the most likely impacts of climate change in Minnesota. An example of the assessed vulnerability of Minnesota’s transportation assets from District 6 can be found in Figure 3. Tier 1 assets are most at risk of failing due to heavy precipitation and resulting flooding. 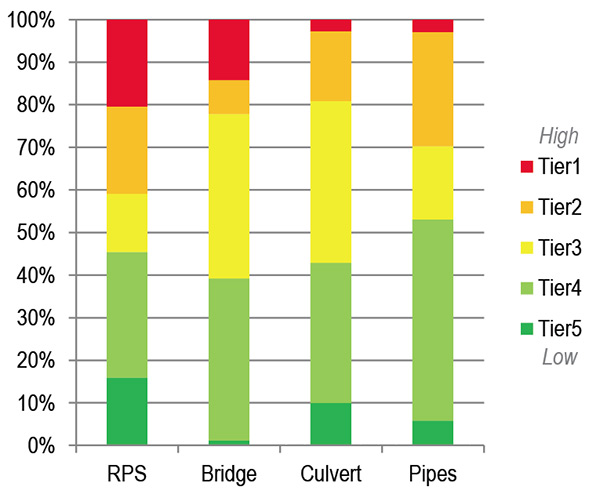